Walter Mair has become known for his captivating original scores, whether they be in feature films, television dramas, or narrative-driven interactive entertainment.

In 2020, he received two Telly awards for “Best Original Music” for his scores to the BAFTA “EE Mobile Game of the Year” Call of Duty: Mobile as well as his score to the Netflix docuseries Formula 1: Drive to Survive. His most recent credits include the psychological horror film The Unfamiliar, the coming-of-age drama Iceland is Best, and the action-thriller Knuckledust.

We wanted a simple, modern, accessible, and authentic Portfolio. The main goal was to represent the artist „Walter Mair“ in the best and most accurate way. The user should get the information he needs directly, but the site should not only be technically and structurally convincing but also visually pleasing, modern, and characteristic. The main focus is on works and projects. Information about the artist and his successes are also part of the site but not as prominent.
You can find the new website here: waltermair.com 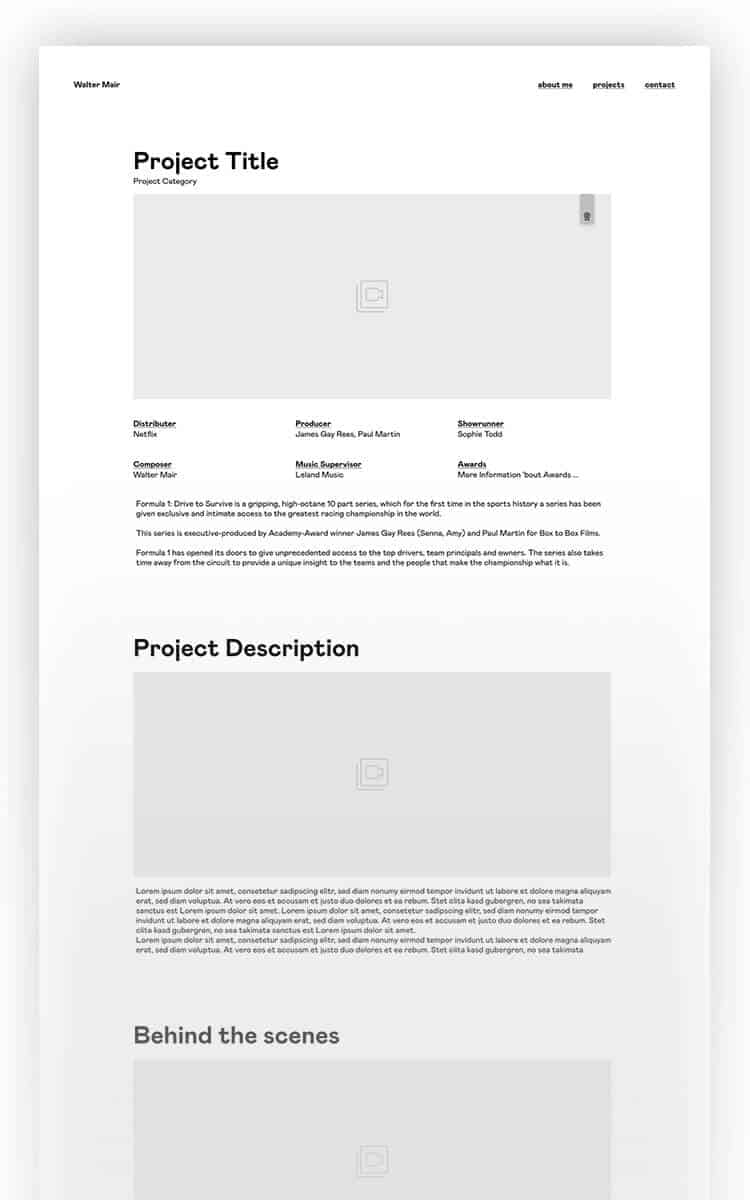 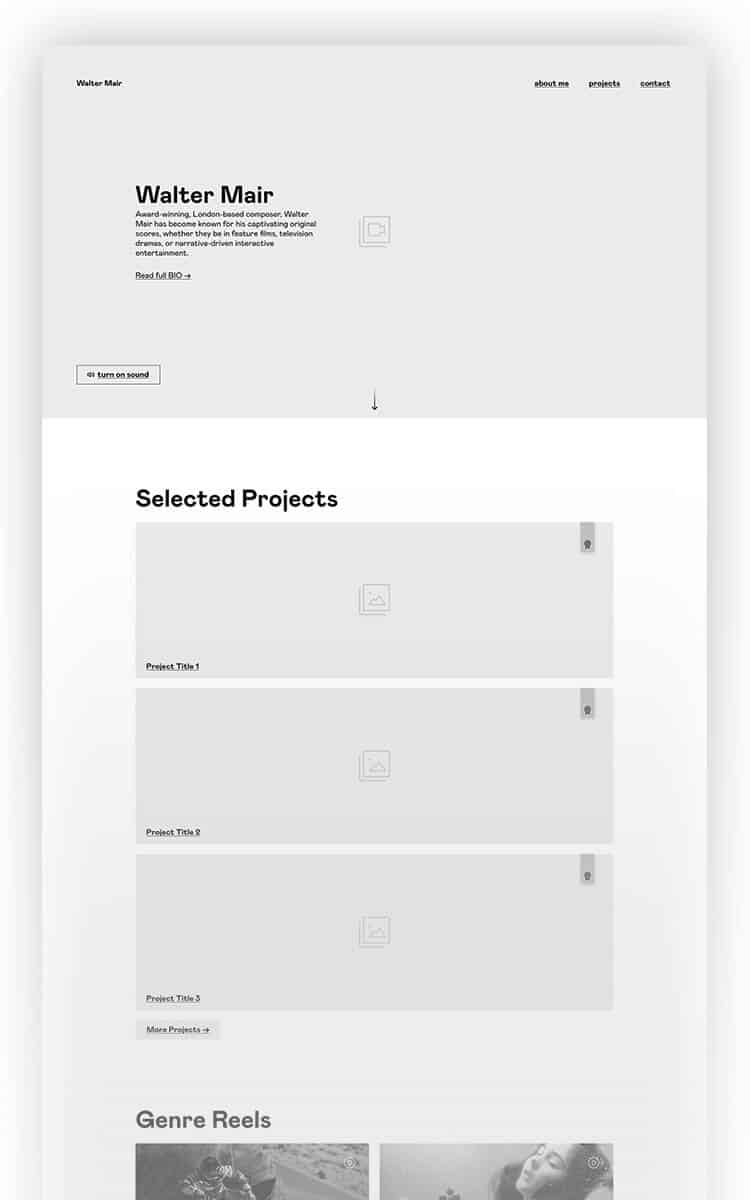 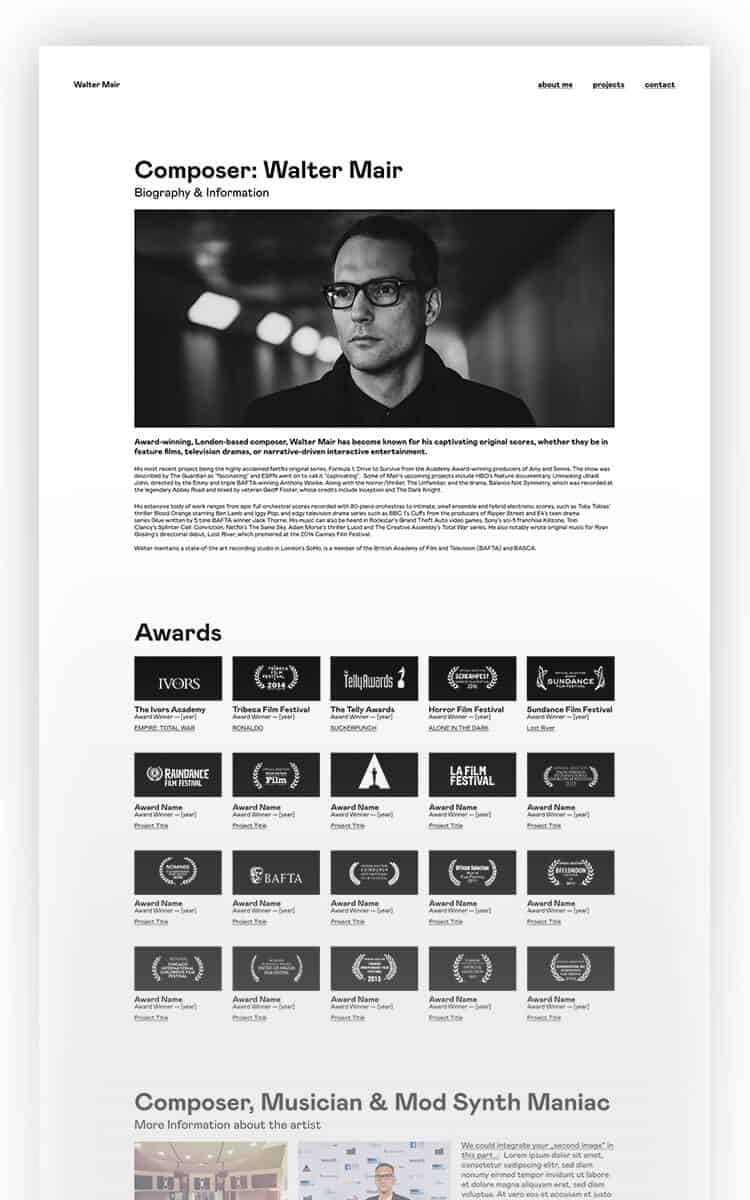 We started by restructuring and reorganizing his old website. Quick and easy wireframes helped illustrate our outcome. 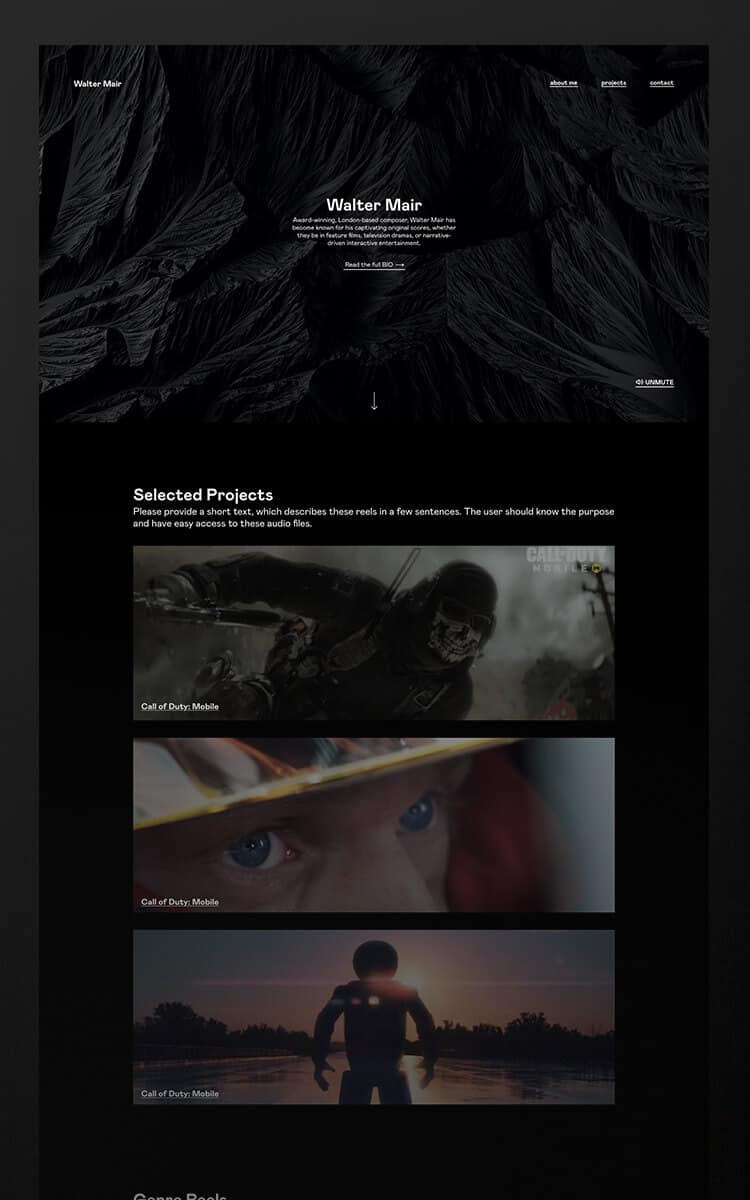 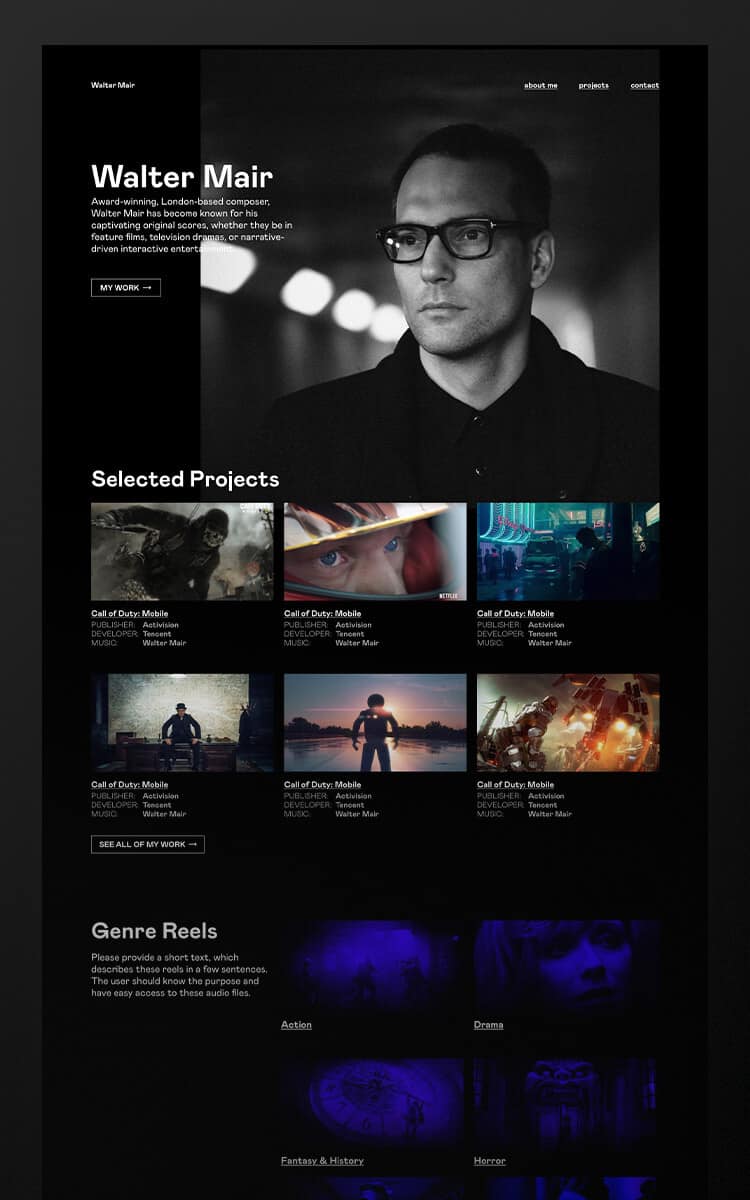 Some early design sketches, after we just finished the wireframes.

Since the website also aims to address potential customers, one thing, in particular, was important. The information offered should be accessible as easily and quickly as possible. The design must therefore function in such a way that it does not interfere with an optimal user experience. Stylistically, we decided on a black and white look, which gives priority to the works and the accompanying images. The typography is modern, but not too trendy. It has a strong character without being too dominant. 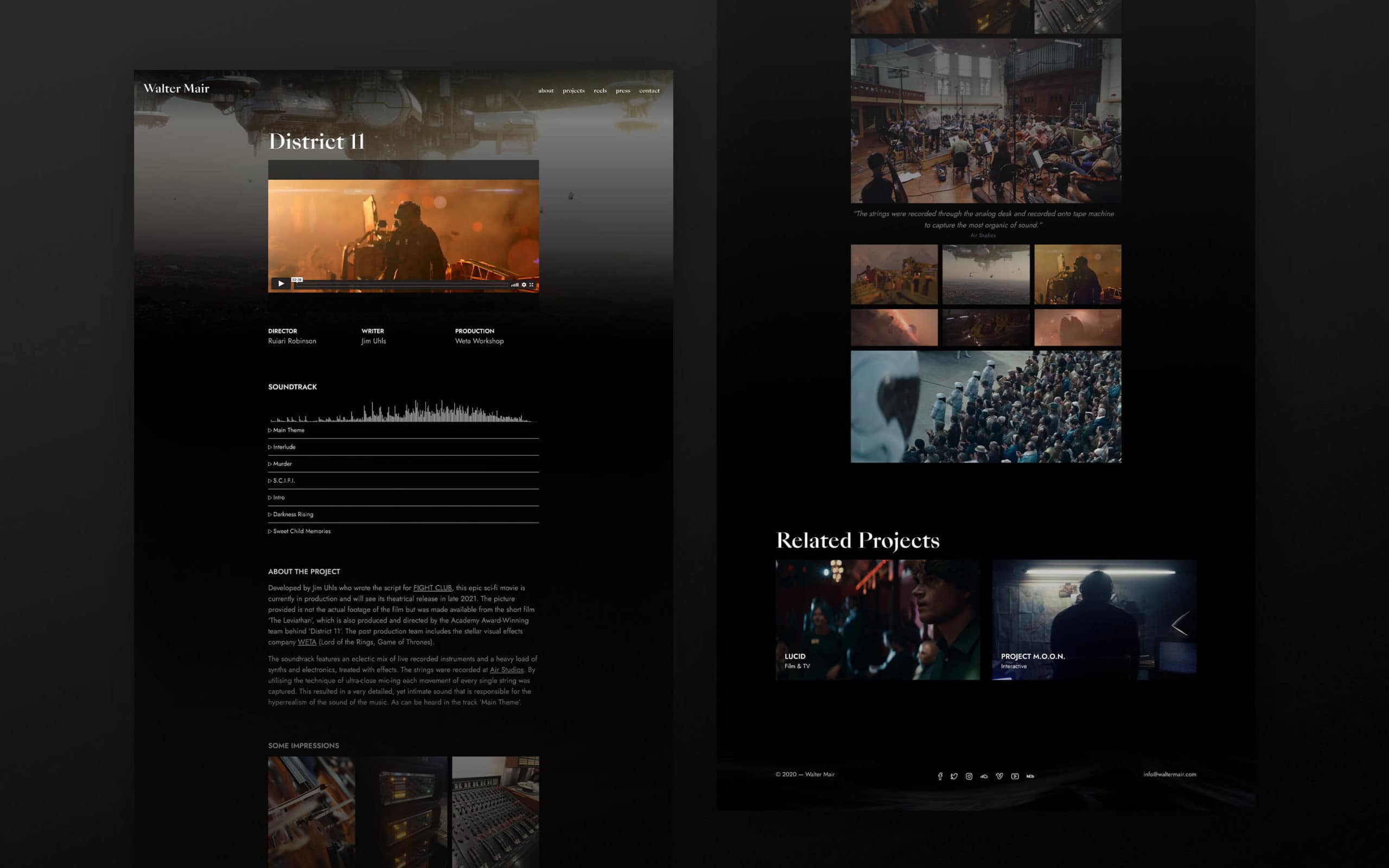 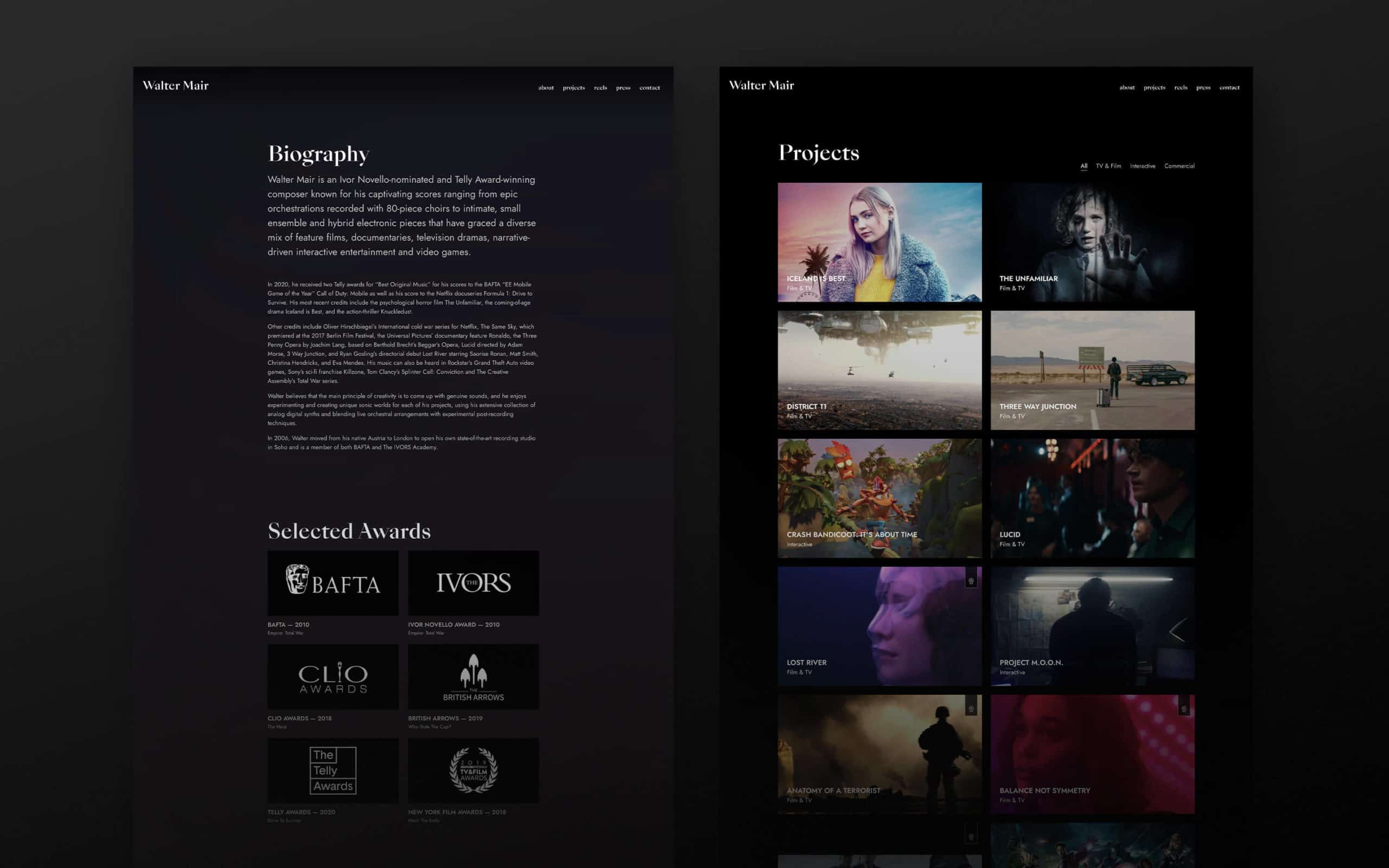 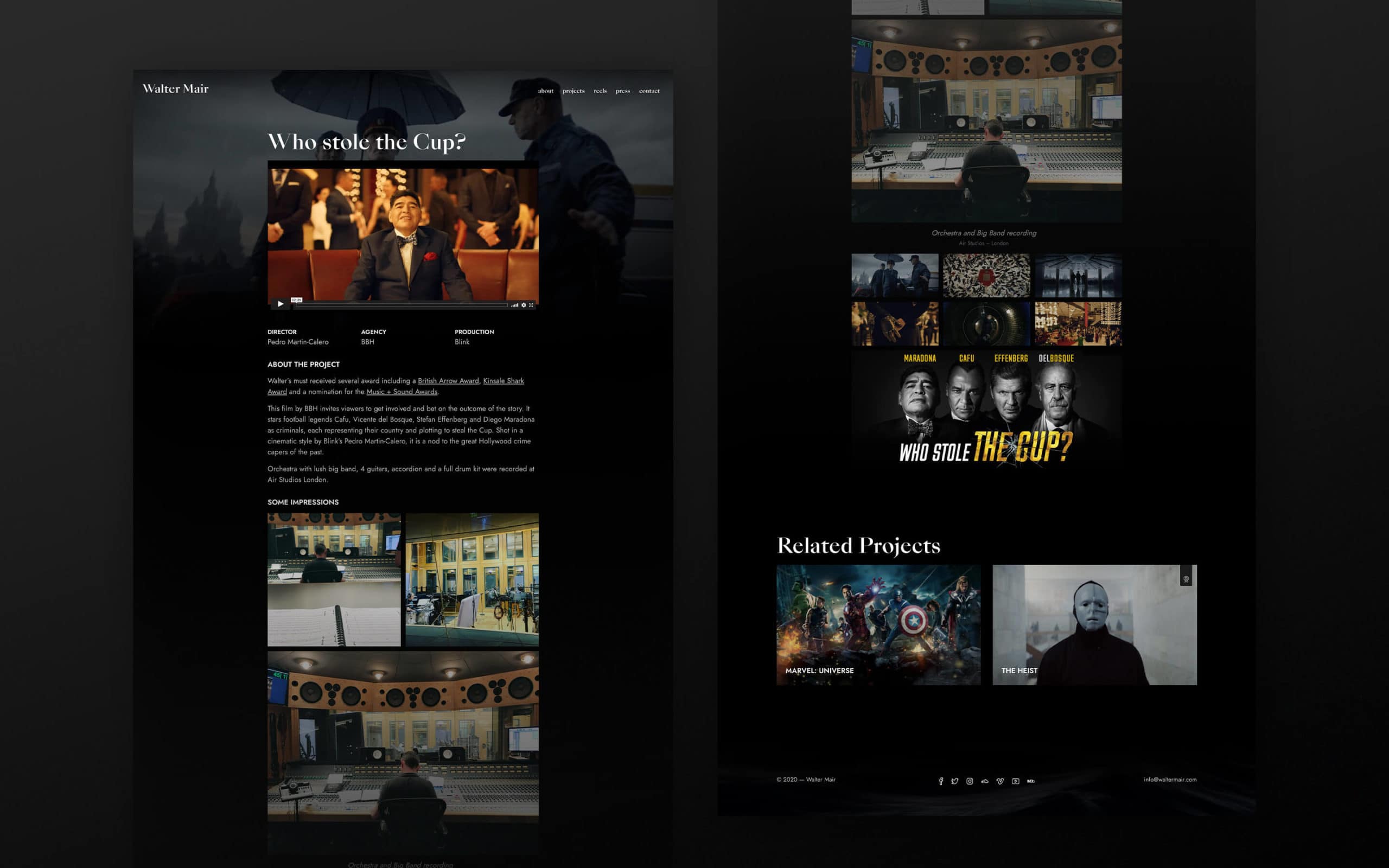 Here is the final result. Every single page has its own personal character, which is necessary to show the artist’s manifold projects and project categories. By following my design guidelines, however, the big picture also works. Everything comes from one source, but not everything looks completely the same. 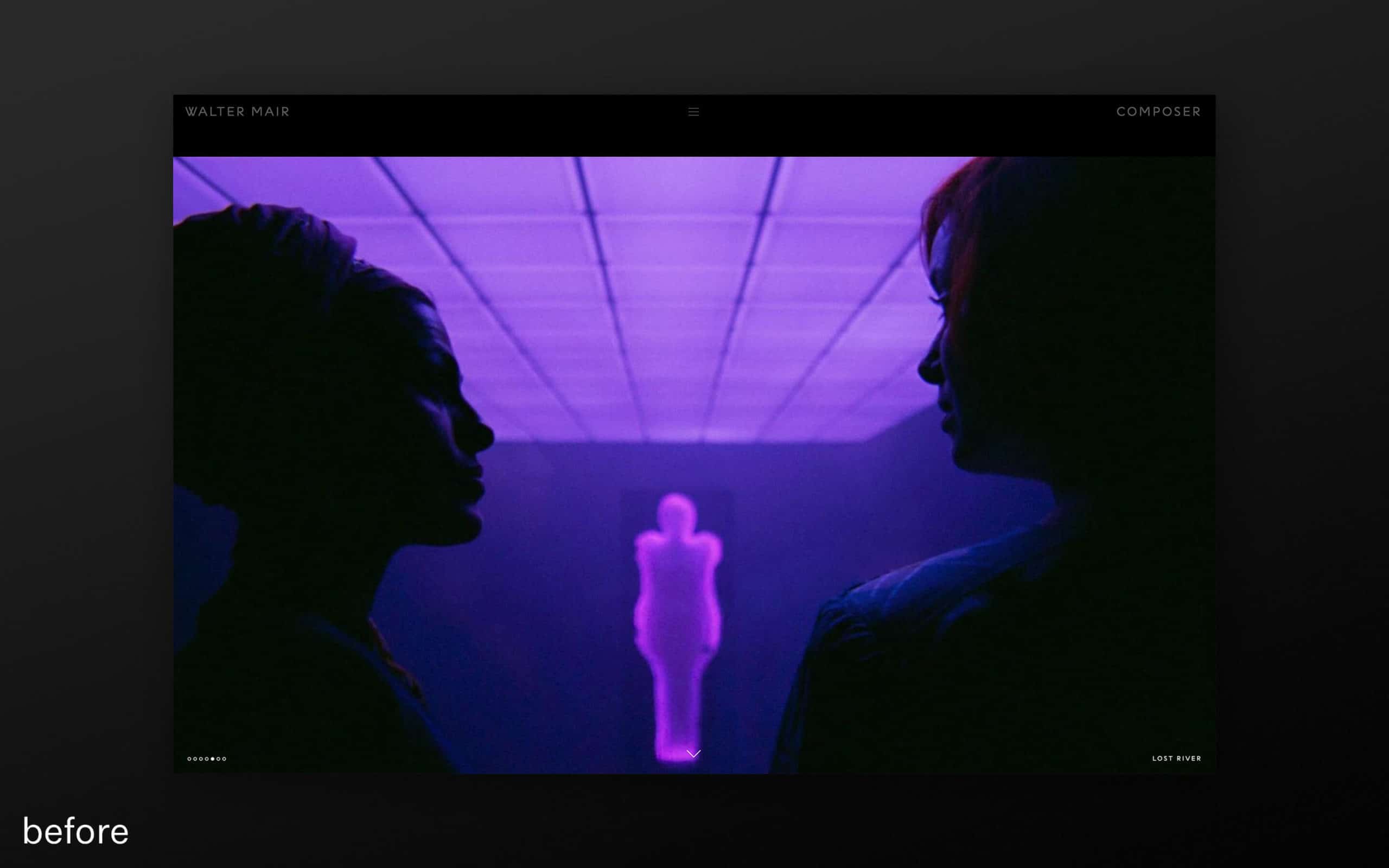 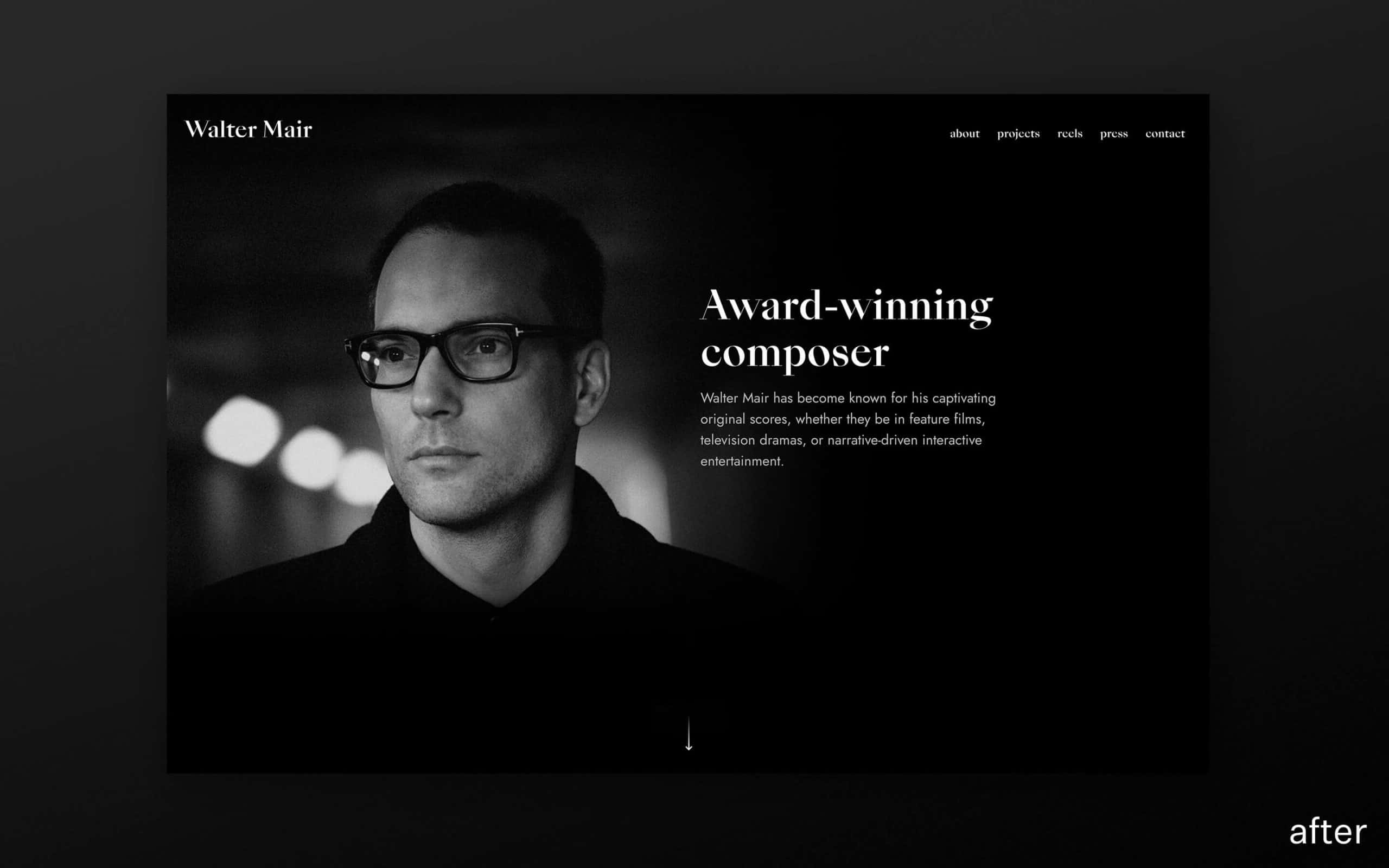 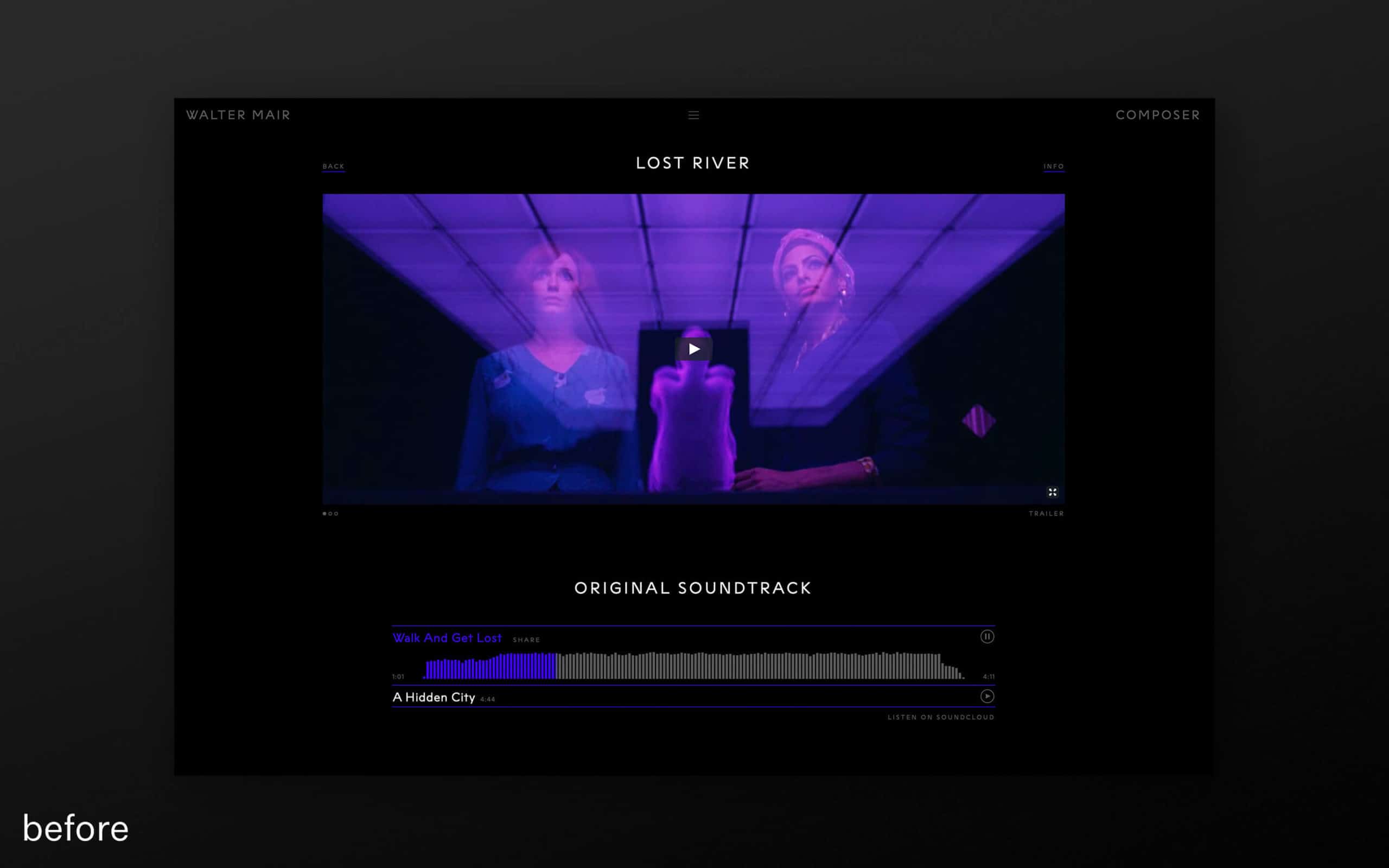 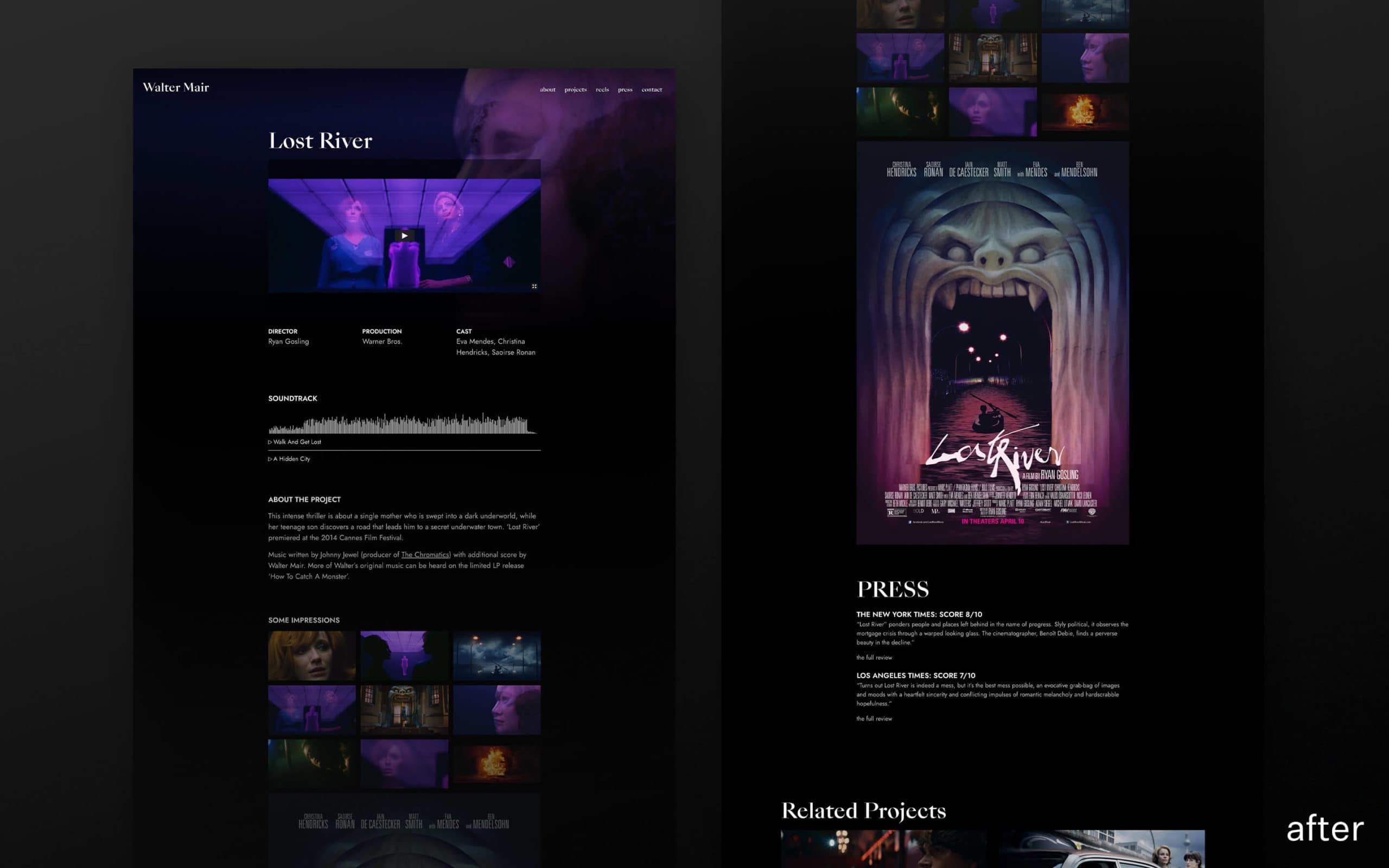